Nearly all road problems, including potholes, are a result of base failures. Pothole Terminator by Mechanical Concrete® is a patented technology that allows your existing road crews to quickly and inexpensively correct these base failures — practically eliminating potholes.

Pothole Terminator by Mechanical Concrete® utilizes a cylinder made from waste auto tires to confine and integrate crushed stone–or other natural and recycled aggregates–into a permanent stone building unit. The result is a strong, economical construction and maintenance product for roads.

If you want a permanent solution to your pothole problem, CONTACT US to discuss getting your exclusive license and materials kit. 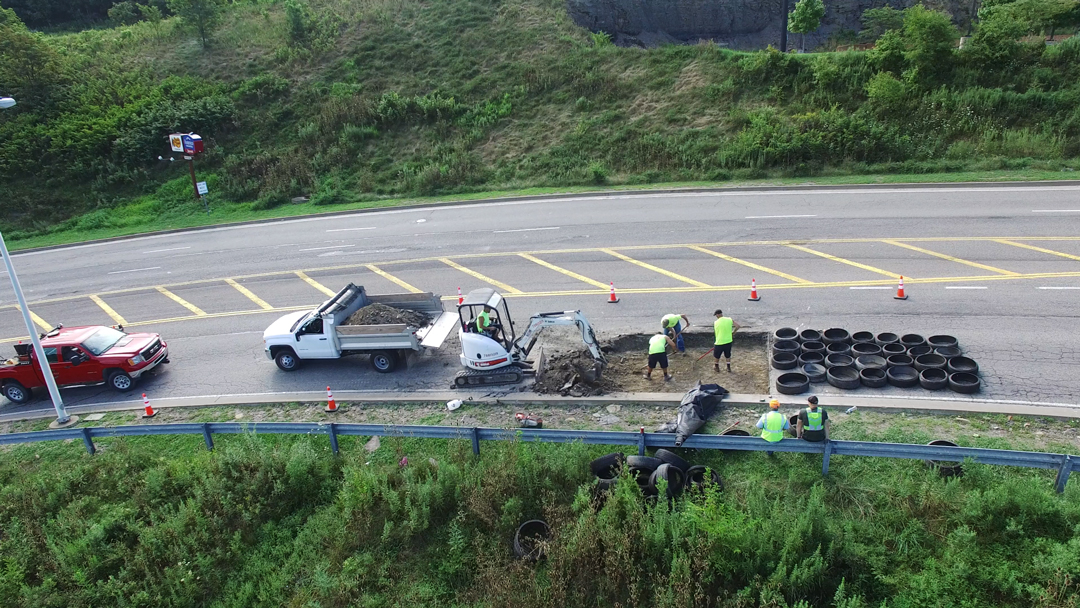 Sam is a registered civil engineer, Fellow of the Am. Soc. of Civil Engineers and a career civil engineering consultant. He is an inventor with five U.S. Patents, a writer and an Adjunct Professor of Civil Engineering at West Virginia University. He served publicly as WV Secretary of Transportation and as a Senior Official for the USDOT in Washington, DC.

He discovered Mechanical Concrete® in 2004 and received a U.S. Patent for the technology in 2008. During that period, Bonasso developed the idea through the traditional technology development stages of modeling, field tests, lab tests and three full scale demonstration projects.

Bonasso brings broad public and private construction industry knowledge and experience to Pothole Terminator. Developing public and private construction application relationships and advancing a new construction technology is a highly complex undertaking. New construction ideas must be able to interact with tried and true means and methods of construction and achieve new efficiencies, economies, safety and security. Understanding the potential wide ranging, systemic impacts of new construction techniques and materials is critical to the successful implementation of a new idea. Pothole Terminator by Mechanical Concrete® fits extremely well into the overall construction environment because of its unusual simplicity. It achieves success by adding a new dimension to building with stone, man’s oldest building material.

Bonasso then returned to West Virginia to pursue a career in civil engineering consulting and founded Alpha Associates, Inc. Engineers and Architects in 1969. Over the next 29 years he led Alpha as a successful regional design firm with offices in Morgantown and Martinsburg, WV. Alpha designed k-12 schools, churches, community and teaching hospitals, highways, bridges, land developments, housing, fire stations, medical office buildings, post offices, armories, university laboratories and facilities, and provided a wide variety safety and forensic services to the ski industry nationwide. Clients included local, state and federal government agencies and private sector businesses and non-profits. During this period Bonasso became widely known in the US and Europe for his aerial tramway, ski lift and steel cable expertise and consulted and traveled in 48 of the 50 United States.

Bonasso is an experienced entrepreneur and inventor. He received four U.S. patents on a modular bridge building system. In the 1980’s two Tension-Arch bridges were built for the WV Division of Highways. In addition to architecture and engineering he has business experience in land development, recreation, commercial office development and management, general construction contracting, seminars and training, software development, and business management consulting.

In 1998 he sold his interest in Alpha and joined the administration of West Virginia Governor Cecil H. Underwood as Secretary of Transportation. In this position, he provided executive direction for 6,000 people and the $1 billion annual budget of seven transportation agencies. He spearheaded the movement of two controversial West Virginia transportation construction projects, the Appalachian Corridor H Highway and the Southern West Virginia Regional Airport. Bonasso became seriously interested in the disposal of waste tires during this period.

From 2002-2005 he served under US DOT Transportation Secretary Norman Y. Mineta in the George W. Bush Administration. As Acting Administrator of Research and Special Programs, with a TS-SCI clearance, Bonasso guided another $1.0 billion annual budget agency which regulated interstate oil and gas transmission pipelines and hazardous materials in transportation, operated the Volpe Center in Cambridge, MA and other emergency and educational programs. Volpe provided technical and scientific support and research for all US DOT agencies and several other US government departments. Before leaving in 2005, he guided the reorganization of RSPA into two new agencies, the Pipeline and Hazardous Materials Safety Administration and the Research and Innovative Technology Administration.